This lesson explains the most common structures used in text: bulleted and numbered lists, sections and subsections, and the title page. As well, you will learn how to italicize and bolden your text, and create special characters — like long dashes and accents (for your communiqués).

We use bulleted lists a lot in our lessons, to help make it clear when there is a series of equally-important items to be explained. LaTeX also offers lists, in several varieties: itemize for bulleted lists and enumerate for numbered lists (there is a third description style we skip since it’s less useful).

All of these commands are used in the form \begin{itemize}…\end{itemize} (rather than \itemize{}). We’ve already seen a similar pair of commands, \begin{document} and \end{document}. We say that these commands create environments.

The command \item begins a new bullet point inside of an itemize environment. For example,

(Recall that square brackets [...] are used for optional arguments.)

The enumerate environment automatically generates an increasing sequence of numbers:

Similar to itemize, the enumerate environment can be modified with \renewcommand.  The code

creates a list numbered (I), (II), etc. The first line indicates we wish to use uppercase roman numerals, and the second line indicates we wish to place parentheses around the number.  In place of \Roman you can also put  \arabic, \alph, \Alph, \roman, or \fnsymbol.  In addition, you can change what number the enumerate environment starts at using \setcounter{enumi}{«num»}. More customization is available with the enumerate package; see more information here.

Typeset the following, which nests one list inside of another: 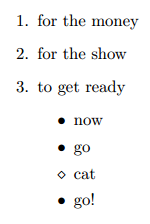 We previously talked about \textbackslash, which gives you the backslash character \. Another example of characters which are dealt with specially in LaTeX are quote marks. What you would probably try first is

but this gives the wrong output

As you can see, the right-hand (closing) marks are ok, but the left-hand (opening) marks are not. To specify opening quotes in LaTeX,

Try running the following through LaTeX to confirm that it gives you the expected output.

LaTeX supplies different kinds of dashes for different situations. Knowing about how to use them will help your writing look professional and clear. For a more thorough explanation of best practices in punctuation, check out The Elements of Style, The Chicago Manual of Style, or Wikipedia, which we link to below.

Note: By default, the en dash and minus sign look the same. Similarly, numbers look the same in math mode and regular text. However, it is possible to change the font family or font size being used for math separately from what is used for regular text. Think about which makes the most sense to use based on the context of where you find it; in this case, I would put \(-40\) and \(+40\) in math mode.  These kinds of small choices can pay off if you are reusing content elsewhere or changing themes.

The Ellipsis… also known as  \ldots

To get three dots in a row, use the \ldots command. We’ll later discuss the different orientations of dots that you can get in math mode.

Accents in LaTeX text are handled by using backslash commands. We give some examples:

The {} braces are required only for some accents, but are generally harmless even if you include them in other places. If you are curious, can you guess what accented letters will be produced by \aa\ae\i\o\ss?

Putting symbols atop variables in math mode like \(\vec{x}\) is different; we’ll cover this later.

Use \emph{some text} to italicize some text in LaTeX. As you may guess, the command name is short for emphasize. Why isn’t it called italicize? The reason is that the \emph command will also be smart enough to show emphasis in a different way when the surrounding text is already emphasized. For example, as we’ll see later, theorem statements are usually typeset entirely in italics, but \emph will be sensitive to the context and actually de-italicize its contents.

En français, pâte can mean either pastry or paste, its plural pâtes most commonly refers to pasta noodles, and pâté is a congealed meat product.

(There are commands that can force italicization, but we wouldn’t normally recommend them. The same goes with some alternative ways to get boldface. Underlining is not a recommended practice in professional print typesetting, so that also takes more work.)

Generating titles and sections with LaTeX is very easy, and the formatting is handled automatically for you. Specify the title and author name inside of the \title{} and \author{} commands. Optionally, include \date{} — or leave it out to default to today’s date. Then use \maketitle to generate the title. Here is an example.

This will produce a document that looks like this (we produced it on August 15, not today!):

The title and author will also show up in the metadata of the pdf file that you produce.

At this time it is convenient to introduce the command \\ which is the newline command. In the title page you might use it to put multiple author lines such as:

It can be used anywhere in normal text, too. It ends one line and begins a new one, but it does not begin a new paragraph and therefore has no indent or extra vertical separation between lines.

Structuring your document is very easy in LaTeX using the \section{} and \subsection{} commands. Between the {} you put the section’s title. Here is an example:

As you can see, the sections are automatically numbered and the section title is set in a large bold font. Once you get used to this idea, several other opportunities for structuring your document are available:

This is the last exercise this week. Combine your solutions to all of the previous exercises in a single document, using three sections for each of the lessons 1-1, 1-2 and 1-3, and placing each exercise in its own subsection. Name the sections after the lesson names and the name subsections after the exercise nicknames (except this one, since that doesn’t make sense). Use your judgement about using hyphens or numbers in section names, in using subsection versus subsection*, etc; that part will not be graded. Additionally, add a title and a table of contents.

Note: The first paragraph in a section will have its indent removed by default.  Please note that if a paragraph in a previous exercise has an indent and yours no longer does or vice versa that we will not be removing any marks; we expect this to happen occasionally.  This may also mean that your paragraph breaks from line to line at a different word than it used to.  This is okay too and is expected.

When you are copy-and-pasting your old solutions in to a single file, you might accidentally cause an error by copying too much or too little at the start or end. We recommend that you should recompile your document after each copy-and-paste, which can make it easier to catch such an error as soon as it occurs and fix it easily. Be sure not to leave this to the last minute.